Much has been said on websites, forums and DIY sites when it comes to determining and converting a vehicle to withstand an EMP attack. An EMP is an Electro Magnetic Pulse. This could be caused naturally, a CME (solar storm), or manmade from a nuclear detonation. The spike or pulse would be damaging to any "solid state" device. A component can be damaged even in free air with nothing connected to it.

It is much easier to convert older cars to EMP proof. The older, the better. In fact, a pre 1963 vehicle may not need any modifications.

First, you need to know what is required in order to run a vehicle.

1) Charging system - to generate 12 volt DC for the ignition system and accessories.

2) Ignition system - to provide spark for the engine spark plugs.

You must understand that an EMP will damage any and all "solid state" devices. Transistors, diodes, integrated circuits. These parts are in all electronic devices. These devices were rarely used in vehicles until around 1963 because most were just being developed and fragile and susceptible to surges, spikes, and heat. More modern devices were improved upon and can withstand spikes and heat but only to an extent.

Pre 1963 vehicles had just a minimum of electrical requirements. The ignition system was simply the spark coil, points and condenser. The charging system is nothing more than a DC generator and relay type regulator charging a lead acid battery. Output current was about 20 amps or so. Accessories were simple headlights, turn signals and brake lights. The wipers and heater/defrost fan rounded out the other loads. The radio, horn, and cigarette lighter were not a major requirement since they were used intermittently or drew little current..

Late model vehicles have many other electronics that are vulnerable such as electronic ignition, alternator, computer emission systems, electric windows, turn signals, lighting, environmental control, and a multitude of sensors, etc. Many of these items were integrated into just a few computer modules all which won't withstand an EMP attack.

It is almost impossible to harden a late model vehicle. There's way too much electronics involved in just the ignition system, engine throttle control, transmission, steering and braking, let alone all the fancy comfort features.

Many older vehicles before 1980 had just an alternator, solid state regulator and solid state ignition system. No other computers or OBD modules to go bad. It is possible to replace the alternator with a generator and relay regulator, and convert the ignition module to a points and condenser system but a competent auto mechanic would have to be convinced to take on such a task. Another way would be to keep a spare alternator/regulator and ignition module in a hardened container and replace them after an EMP hit. (The problem would be a second EMP that would detonate sometime afterwards, after you have replaced the defective components.) Some ignition modules are integrated in the distributor itself. Others are a module mounted on the wheel well or firewall in the engine compartment.

Generator: The older the vehicle, the easier it is to retrofit. However generators are getting scarce since the core value of the copper and steel make it a valuable commodity. Junk yards scrap them first and they will be hard to find. Most times you will have to find an appropriate pulley to attach to the generator since they normally don't come with the generator. Also a special mounting bracket may need to be fabricated and retrofitted in place of the alternator and hopefully it will fit in a given space. The generator shown here is a Delco Remy #1102980 which was popular in many GM vehicles from the 50's and into the 60's. Generators will periodically require brush replacement since they handle the 20 amp current. Keeping spare brushes and bearings is a smart idea. 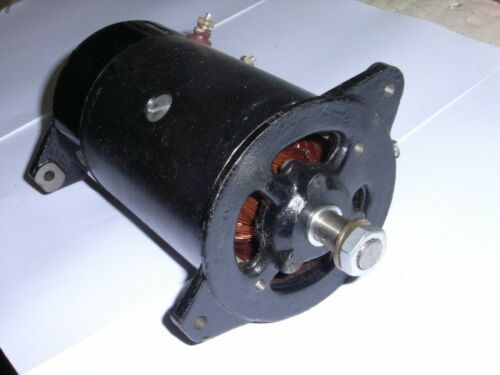 Of course you will need a mechanical relay type regulator to make the generator function and a competent mechanic with electrical skills. Obtaining and studying an old Motor's Manual for the year of your vehicle will help in maintaining and troubleshooting your vehicle.

The reason why an alternator is not reliable during and EMP is that there are 6 diodes to convert the AC generated, to DC. Also the regulator is all solid state. An EMP will short the diodes and cause the battery power to backfeed into the field coil and burn the wires and eventually discharge the battery within a few minutes. The regulator will become useless and beyond repair too. 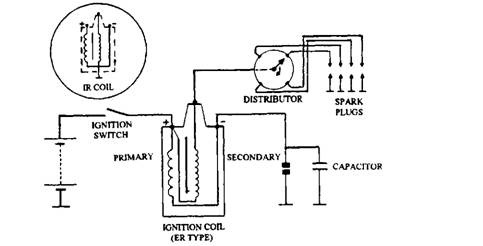 That's all there is to the ignition system. More modern vehicles use individual "coil packs" for each plug and an electronic module to control the spark timing. This is not easy to retrofit back to a conventional system. It is beyond the scope of this page to determine if it can be modified or if it will withstand an EMP hit. Some will say that shielding of this system in modern vehicles will prevent an EMP from disabling this system but I find it unlikely.

Accessories: Most of the accessories in a vehicle are just conveniences except for the wipers, heater, and lights. The simpler the accessories the easier and less likely they will be affected. Wiper delay circuits are solid state timing modules. Heater/defroster may be controlled by a solid state motor controller. Lights could have electronic flashers and if they are LED type, they will not survive an EMP pulse.

So what other vehicles will withstand an EMP attack? Some older farm tractors, diesel or gas, some Mopeds, some motorcycles, some riding mowers, some heavy construction equipment, etc. Typically vehicles made before 1963 that haven't been modified with more modern electrical systems.

Diesel vehicles: This site won't go into the possibilities of diesel vehicles except for the fact that conventional diesel engines don't have an ignition system and will most likely run after an EMP attack. This is because there is no ignition to speak of. Just a solenoid operated fuel control valve and generator to provide lights and fuel relays. Cylinder combustion happens with very high compression after the fuel injector injects fuel into the cylinder. More modern diesel engines have many computerized controls and are vulnerable to an EMP.

I have a John Deere backhoe and the only electrical device is the Motorola alternator. If the alternator died and I disconnected it, the backhoe would continue to start and run as long as the battery was charged. No other power is needed. Of course the conveniences of lights, heater motor and windshield wipers are not needed to minimally operate.

I have an old 1977 Honda motorcycle. Very little electronics. Just a sealed alternator for charging the battery and running the lights. The ignition is operated by a magneto.

Magnetos are electromechanical coils that provide spark for the plugs and nothing more. The flywheel has a magnet embedded in it. The flywheel spins around and passes by two coils. When it does, it generates a large high voltage spike to ignite the spark plug(s). No solid state parts to blow out in older conventional magnetos. More modern magnetos however have solid state switching to jump the voltage hotter. These electronic magnetos will not withstand an EMP.

Older gas farm tractors use magnetos. Some use a starter motor/generator. Its only purpose is to keep the battery charged for starting. Very little or no electronics.

Where else are magnetos found? Older single engine airplanes, push and riding lawnmowers, weed trimmers, chainsaws, leaf blowers, are some. Of course later model two cycle engines may have a solid state component in it so you need to plan for that.